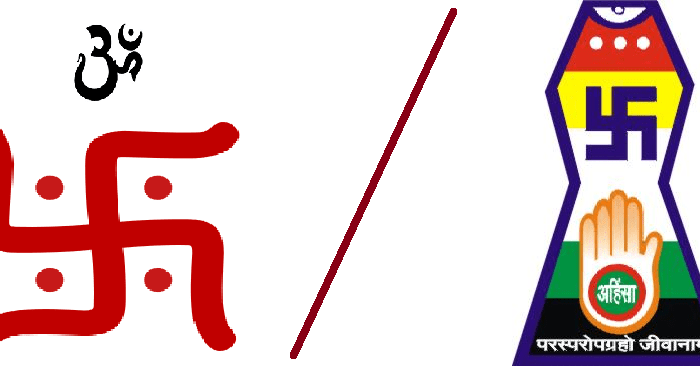 Before starting this discussion, I would like to put a word of caution:
“This article is not intended to generate any serious thoughts of the readers; it is a light-hearted article and should be taken in that sense only. The facts discussed here are only the author’s viewpoint (and backed by her lack of knowledge and wisdom), not intended to hurt any of your religious or other sentiments”.
Being born in a Jain family, we are always taught the lessons of Jainism by our parents and the Jain gurus. We have our own set of festivals, culture, religion, teachings (non-violence being the biggest of them all), etc. At the same time, we are Hindus as well, we celebrate all the Hindu festivals like Holi, Diwali, Vaisakhi, Rakhee, etc.
So for a change let us discuss the two religions, from the different perspectives (the critical angle):

There is a lot of penance involved in both the religion’s paths. Both Jains and Hindus do go through lots of fasting, worshiping, yajnas, etc., in their path towards spirituality. But comparing the level of difficulty in the fasting, Jainism is sure tougher. Like, we can often find people, if we go to a Jain Sthanak, who is on the 30th day of their fasting (like literally without a single bite of food), and their face would be no paler than another Hindu who has been fasting since only yesterday ( and mind you, Hindus do eat fruits when they are fasting).

And trust me, I have also seen Jain Gurus giving the speech (vakhyan) to people, without using the mike or a loudspeaker, which is easily audible to people even more than 100-150 meters away on the 90th day of their fasting. And 90 days of fasting means, without having taken a single bite of absolutely anything in their mouth, except water. And it is not just fasting, Jains do go through a lot of penance in their path of religion.

So if we compare the level of difficulties in the path of both religions, Hinduism, being slightly easier definitely is a winner, at least for the lethargic generation of ours, but for others, it is sure Jainism.

For Jainism the available literature is too less in comparison to that of Hinduism, quantitatively speaking. Talking about the 24 Tirthankaras of Jainism; the majority of literature that is available regarding their life stories is only about Lord Rishabh Dev Ji (1st tirthankar), Lord Mahavira (the last tirthankar), and Lord Parasnath Ji (23rd tirthankar). For other Tirthankaras, you can only find their brief life story (at least from what is available on the internet these days). Whereas for Hinduism there are plenty of stories available in books and the internet, even for the remotest deities worshiped.

The Tirthankaras of Jainism are like the saints who have done really hard work and penance to attain their godhood. Character-wise these are the people become faultless, immaculate, irreproachable, and absolutely flawless on their attaining the godhood (or Keval Gyan).

The Hindu literature also has such flawless characters like that of Lord Ram, but otherwise, all the other Gods have their negative shades as well. Like Lord Shiva has everything in abundance (be it love or ire), Lord Krishna is also depicted as a cunning and scheming character, etc.

Thus the character built up of both the sects has its own essence. Jainism though seems more flawless, but Hinduism looks more realistic to me. I mean, the Hindu Gods and avatars are closer to what homo-sapiens are.

The Jain literature is filled with the stories of sacrifice, and non-violence towards the attainment of enlightenment. Whereas, the Hindu literature is filled with the story of war, love, mystery, revenge, etc. And above all, there is always a victory of good over evil. The written text of Hinduism is so articulately written, at times, reading it you feel like you belong to the era.

For the use of all the spices to engage the audience, Hinduism does win on the ‘plot’ front.

The path of Jainism (if followed) takes you to the path of liberation, whereas; Hinduism takes you to the path of heaven. Thus, Jains are a bit more ambitious in their pursuit, liberation being a bigger thing than being in heaven. But if you ask a true Hindu, he will probably say “Are you kidding me! Who would trade-off an opportunity to be in heaven under the shadow of your deity till eternity, for liberation”? And why not, I mean the feeling of being in love/ bhakti, would be bigger than any other feeling in the world.

So for this aspect also, which of the two religions’ has an upper hand depends on your perspective. For me, Hinduism wins here.

Jainism has ‘non-violence’ as its motto and Hinduism has ‘Love thy God’ motto.

The focus area of Jainism is our brain whereas the focus area of Hinduism is our heart or the hormones (technically speaking). Jainism prime focus is to keep the brain peaceful and full of sacrifices, it does so by emptying yourself. According to it ‘you can attain yourself, by letting yourself go out of you’ (pretty tough). On the contrary, in Hinduism ‘you attain yourself, by letting your heart filled with bhakti/love’ (beautiful).

For me, what impacts heart is stronger than what impact your brains. Technically speaking also, one can survive being brain dead, but not without heart.

Hinduism gives us lots of festivals to celebrate in comparison to Jainism. Being a Hindu is a lot more fun.

Celebrating Hindu festivals we pray to Goddess Lakshmi for wealth in Diwali, to Goddess Saraswati for education in Basant Panchami, to Goddess Annapurna for fulfillment at the time of Vaisakhi, for good children in some other festival and what not; and all these for our material fulfillment.

In Jainism too, we do pray for ourselves only, but for a bigger purpose. We do seek forgiveness for any wrong done by us that may have caused any afflictions to anyone (be it people or any other species), whether knowingly or unknowingly.

Daily we do get involved in acts or speak out words that do hurt people in some way or the other, and in 80-90 percent of the cases, we do know that we have done a mistake. It might be our egos or lack of courage, in most of the cases we do not go and say sorry for the same, and howsoever bad we might be feeling about the situation. But this is life! And it is not an android game, wherein we can go and undo a move. So what Jainism gives us, is a day called ‘Samvatsari’ when we do apologize people for any mistakes done by us.

And what Jainism has given me is a habit; I daily, before going to bed apologize for any of my ill behavior any time during the day.

And on the occasion of  Samvatsari, today I also beg for your forgiveness if this hurt your sentiments in anyways. 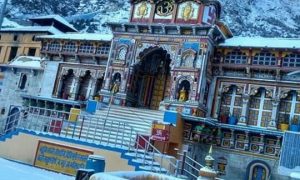 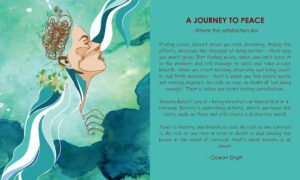 A JOURNEY TO PEACE – Where the Satisfaction Lies. 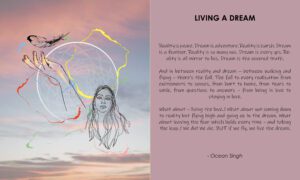 LIVING A DREAM – BY OCEAN SINGH 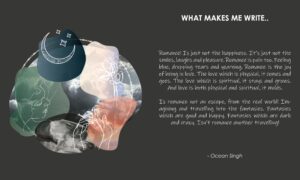 What Makes Me Write – Ocean Singh 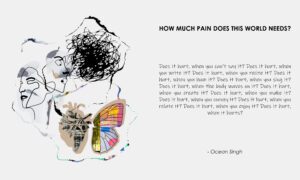 HOW MUCH PAIN DOES THIS WORLD NEEDS? 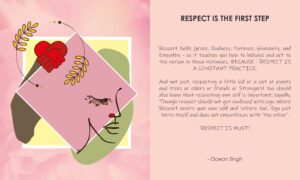 RESPECT IS THE FIRST STEP!