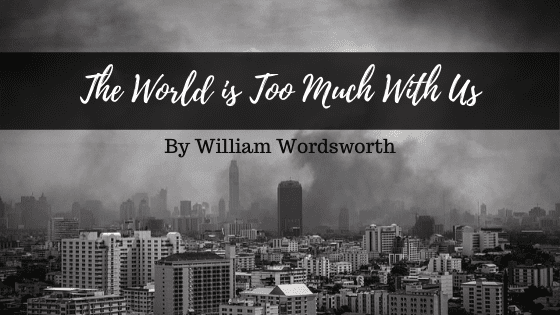 The world is too much with us; late and soon,
Getting and spending, we lay waste our powers;—
Little we see in Nature that is ours;
We have given our hearts away, a sordid boon!
This Sea that bares her bosom to the moon;
The winds that will be howling at all hours,
And are up-gathered now like sleeping flowers;
For this, for everything, we are out of tune;
It moves us not. Great God! I’d rather be
A Pagan suckled in a creed outworn;
So might I, standing on this pleasant lea,
Have glimpses that would make me less forlorn;
Have sight of Proteus rising from the sea;
Or hear old Triton blow his wreathèd horn.

We were on our way a road trip from the Surat to Gir forests, a beautifully protected forest area known for Asiatic lions in the state of Gujrat (India). On the way, around 45-50 miles from Surat is the city of Ankleshwar. Ankleshwar is known for its industries. You enter the city, it welcomes you with a pleasing fragrance (And, if you have ever been to this city or heard about it, you would know how sarcastic this line is). The ambiance of the city is so bad that unendurable is an understatement.

So as we got down near a fuel station to get water bottles and snacks, the smell kept on getting intolerable. And as we were talking about the same and guessing the reason for the same, a man who was overhearing us interfered saying, “it’s not going to go anytime soon, the smell is very much a part of the air”. Then he told us that it will get worse around 6-6:30 in the evening when they start releasing pollutants from the industries.

I became inquisitive. And as I was talking to the man he told us that he has been working in the accounting department in a pharmaceutical factory for the past 34 years. He told us that this smell is mostly due to untreated ammonia that is released by the industries in the area. And not just that when you see the clouds of black smoke coming out of the factories, it is due to the carbon emissions. He told us that this is the reason his wife recently suffered skin cancer. And that his daughter, who was around 26 years of age was suffering from a severe respiratory ailment. He was planning to quit the job and move to his homeland somewhere in Uttrakhand for health reasons and look for some alternate employment.

I inquired if there was any way that these emissions could be reduced. Or shutting down was the only option. Because for like the companies producing medical drugs, the country can’t afford to shut them down. He said there are treatment plants and filter bags that can be installed to reduce the emission levels.

I wondered, if this can be done then why isn’t it done. Then what he said was really shocking. He said, “because there is a cost involved”. If the companies start investing their “hard-earned” money in pollution control equipment, their shares will not do that well in the stock markets and the wealth of the owners might be impacted.

He said, once there was an environmental audit at there factory. The emission levels were recorded way above the acceptable standards. The factory was shut down for more than a week, meaning so much loss for the company. Then the managing director of the company met the officials at the ministry. He gifted a few pieces of exquisite jewelry and transferred cash (a big sum) to them. And the case was closed. And not just this, the minister’s daughter is married to the son of the company’s owner.

William Wordsworth (7 April 1770 – 23 April 1850) was an English Romantic poet who, with Samuel Taylor Coleridge, helped to launch the Romantic Age in English literature with their joint publication Lyrical Ballads (1798).

Wordsworth’s magnum opus is generally considered to be The Prelude, a semiautobiographical poem of his early years that he revised and expanded the number of times. It was posthumously titled and published by his wife in the year of his death, before which it was generally known as “the poem to Coleridge”. Wordsworth was Britain’s poet laureate from 1843 until his death from pleurisy on 23 April 1850.

The World is Too Much With Us – The Poem

This poem was written by Wordsworth in the backdrop of the Industrial Revolution. He was so put off by the increasing industrialization that was taking place. The whole process of urbanization had a huge cost involved. The cost was nature. The rich kept becoming rich, and they gave no heed to growing deforestation. Wordsworth was a hardcore romantic poet of his time and most of his writings were inspired by his love for nature.

William Wordsworth says that instead of living in a high-society, modern world, with up-to-date technology (blooming at the cost of nature), he would rather choose to be a low-born or ‘pagan-born’ and enjoy the scene of Proteus (the moon of the sea) rising from the sea.

William Wordsworth’s poems are highly inspired by his love for nature.

‘Sordid Boon’ emphasizes the grossness of the blessings that mankind had received due to the emergence of technology. We were losing nature at the cost of automation that was taking place.

‘Pagan’ is a person born in low caste or creed. The one who has little or no religion and who delights in sensual pleasures and material goods, a hedonistic person.

‘Lea’ is an arable land used temporarily for grazing.

‘Proteus’ is a god of the sea as per Greek mythology. Some who ascribe a specific domain to Proteus call him the god of “elusive sea change”, which suggests the constantly changing nature of the sea or the liquid quality of water. He can foretell the future, but, in a mytheme familiar to several cultures, will change his shape to avoid doing so; he answers only to those who are capable of capturing him.

‘Triton’ is a son of Poseidon described as a demigod of the sea with the lower part of his body like that of a fish. Triton lived with his parents, in a golden palace on the bottom of the sea. Later he was often depicted as having a conch shell which he would blow like a trumpet. 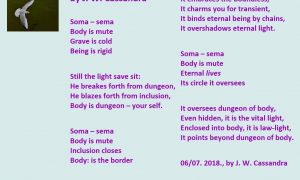 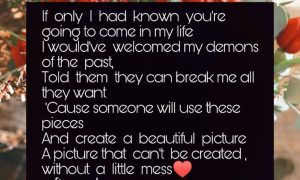 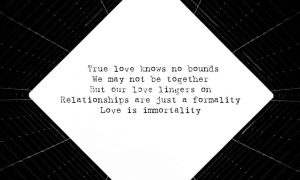 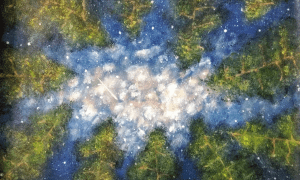 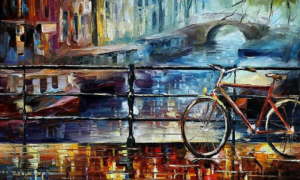